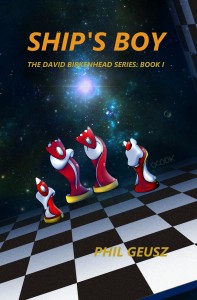 Once upon a time there was a boy named David, who slew a terrible foe…

David Birkenhead might have been only twelve years old, but his entire life was already laid out for him.  First his father was supposed to teach him how to run a starship’s engine room.  Then, when the time came, he’d take over the job himself.  This was the way of things for slavebunnies like David; luxuries like career-choices were reserved for humans only.  Not that David was complaining– compared to the farmbunnies or domestic-servant rabbits, he had it made.  There was even a pretty doe waiting for him in the wings.

Then the ships of the Boyen Emperor arrived on David’s homeworld and nothing could ever be the same again.  Great Houses of Nobility would contest for power, kingdoms would teeter on the edge of oblivion…

…and out of the resulting vortex young David would bring peace and justice to a thousand worlds.

Order this book, and pay only shipping and handling.

Download all e-formats from Smashwords for Free.
Download This book for your Kindle for free.
Get This Book On your Nook For free.