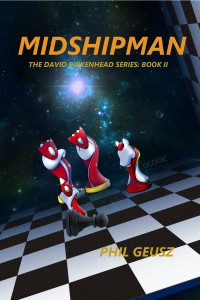 In this second volume of the David Birkenhead series, our young hero has been adopted into the powerful House of Marcus.  But… What can be done with a former slave-boy who’s earned his kingdom’s highest award for bravery, but who also can’t shed his Rabbithood no matter how hard he tries?  Send him to the Naval Academy, of course, where he must battle loneliness and prejudice as well as the rigors of military discipline.  For Centuries noble houses have struggled with the problem of what to do with their younger, non-inheriting sons.  It’s even tougher when one of these younger sons is a Rabbit and therefore by definition a former slave.

David’s courage has already been proven beyond question, and it is said that the hotest furnaces produce the finest steel.  Yet… How can a mere Rabbit survive such pressure?

Will David crack?  Or will he stand taller and prouder than ever, winning great victories for his kingdom and his fellow slave-species along the way?