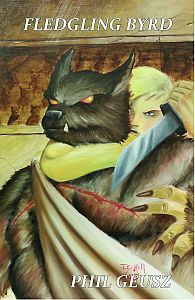 “No matter what you do, never, ever piss off a Gonther! The results can be… Awe-inspiring.”

Robert Herman Byrd and his brother Timothy have almost finished growing up among humanity’s alien masters. Raised in the violently militaristic Artemu fashion, they’ve survived harsh conditions, inhumanly strict discipline and endless forced marches. Ultimately, Clan Gonther means to rule Earth through them. But first their educations in planetary governance and exploitation must be completed. Timmy is sent off to master the finer points of palace intrigue under the direct tutelage of his adopted father, while Robert is dispatched to Ock, an embarrassment of a planet where money is being lost hand over fist and the natives are dying like flies. There Robert must confront not only the more disturbing elements of colonial rule…

…but an enemy even darker and more dangerous than the Artemu themselves.

Available in Softcover for $6.99